We at Spratt Personal Shipping have agents all over the world and pride ourselves on our ability to  ship to any global destination at an affordable rate. We handle shipments from any point in Ireland to any point worldwide. This extensive geographical business network has afforded us many opportunities to experience other cultures and immerse oureslves in their traditions and celebrations. As Patrick’s day approaches, we’ve been reflecting the occasions when we’ve celebrated abroad and how these differed from festivities at home. Below is a list of the five cities which stand out from our collective memory for their unique approach to Patrick’s Day festivals. We deem our selection to be prime examples of the public holiday’s ability to capture the hearts of Irish (and Irish for the day) all over the globe.  Our selection of celebrations are unparalleled anywhere else in the world.

This tiny Caribbean volcanic isand is the only other country in the world – in addition to Ireland – for which St. Patrick’s Day is a public holiday. A key part of the central celebration is the Masquerade which sees Montserratians dress in colourful hats resembling bishops’ mitres, dance Irish jigs and crack whips in mocking defiance of their one-time Irish masters. 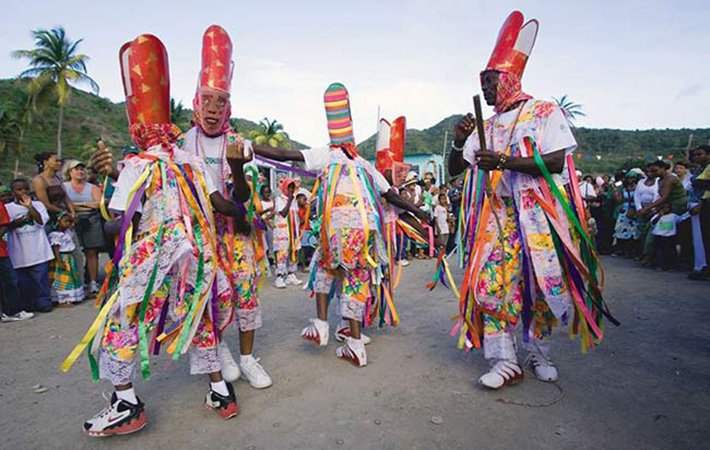 If this has piqued your interest and you now feel compelled to visit Montserrat, bear in mind that Spratt ship to Plymouth, Montserrat.

The Argintinian capital plays host to the largest St. Patrick’s Day celebration in South America every March 17th. However, Buenos Aires bucks the usual trend by foregoing a parade in favour of an annual street party in the city centre featuring music, dance and the Argintine take on craic. 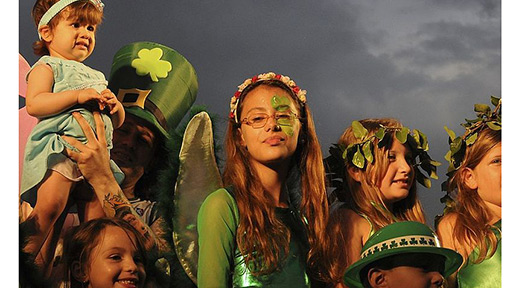 If you’d like to experience the street party in person next year, don’t forget to engage Spratt’s services to remove the hassle from shipping your effects. Buenos Aires is but one of the many South American cities which we serve.

Auckland is perennially distinguished by holding the first St. Patrick’s Day party, since midnight on March 17th strikes New Zealand’s largest city before anywhere else. It also holds the distinction of being the farthest celebration from Ireland, being geographically located at the diametric opposite end of the world, a staggering 11,290 miles away from Dublin. Each year Auckland’s iconic 1,076 ft Sky Tower is illuminated with the Irish Tricolor for the day. 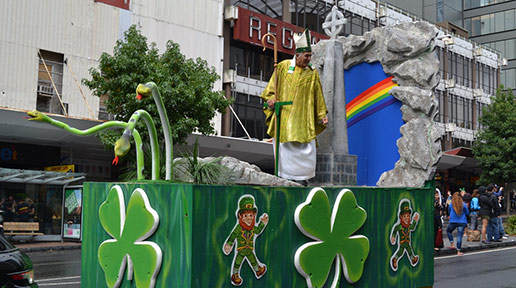 Should this post have inspired you to ‘drown the shamrock’ with the Kiwis next year, please engage the services of Spratt to ease your travel woes. Auckland is but one of the cities in New Zealand on our roster.

The first celebrations took place here in 1992. The Tokyo parade is the largest of several which occur in Japan. Its initial purpose was to introduce Ireland to the Japanese populus in an approachable manner. Since then however, celebrations here have evolved into a visually spectacular melange of traditional Japanese stylized dress fused with Irish costumes.

If you’re considering travelling to Tokyo, for Patrick’s Day 2017, keep in mind that Spratt ship to Tokyo in addition to a host of other cities throughout Japan and the Far East.

Singapore’s St. Patrick’s Day Parade constitutes the largest celebration in Southeast Asia. The Singapore River is dyed green, costumes are donned and a Harley-Davidson convoy leads the pack. The St. Patrick’s Society of Singapore, which is comprised mostly for ex-pats, also hosts a ball at the Shangri-La-Hotel with free-flowing  wine and beer, live music and Irish dancing.

Spratt ship to Singapore, Singapore should you wish to sample these delights for yourself next year.

The above list is doesn’t quite convey the vast reach of our global connections. To learn more about the far-flung countries, cities and ports to which Spratt ship click here. We also ship to other destinations on request. Send an email to info@sprattpersonalshipping.com

We’d like to take this opportunity to wish all our loyal customers a happy St. Patrick’s Day wherever they may be celebrating and thank them for choosing Spratt to handle their shipping needs.