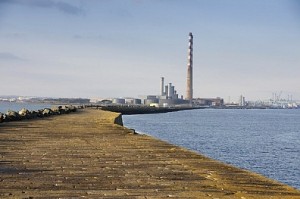 Three hundred years ago last week the decision was made to build the Great South Wall (often called the South Bull Wall) in Dublin Bay.

For centuries previous to 1715 Dublin Bay was considered a relatively dangerous place for ships. They experienced problems sailing into the port as channels kept filling up with sand, causing ships to run aground on the seafloor. In those days wind exposure was also an issue too.

The decision was made to build the great walls in order to concentrate the flow of the River Liffey “into a kind of bottleneck to break up the hazardous sand banks” according to The Journal.

The 4km long Great South Wall took a total of 80 years to build and when it was completed in 1795 it was the longest seawall in the world.

Three centuries on from the beginning of the project the Great South Wall – along with it’s younger counterpart on the North – remains an essential part of the port.

The CEO of the Dublin Port company Eamonn O’Reilly said: “this iconic structure has sheltered, protected and played a defining role in shaping Dublin Bay and Dublin Port over the centuries, becoming a city landmark in its own right.”

Aside from transforming the Dublin Bay, the Walls have become extremely popular with walkers, joggers, swimmers, photographers, and Dubliners in general as documented by these terrific images by RTÉ journalist Philip Bromwell.

As Eamonn O’Reilly said, the walls have shaped Dublin. Literally. They gave us Bull Island, another much-loved part of Dublin, which formed over the decades from sand depositing on the northern side of the North Wall. What once wrecked ships gave birth to an island.

The Great South Wall transformed Dublin Bay and the shipping industry. Every time Spratt ship your goods out of Dublin to locations all over the world we pass by those walls knowing that we probably wouldn’t exist without their presence.

So next time you’re out there enjoying the magnificent views remember to also appreciate the history behind one of our favourite parts of Dublin.